BELCHERTOWN — With the sun streaming down and a slight autumn breeze in the air on Monday, it is not that surprising that the teachers at Swift River Elementary School wanted to get their students outside.

What is more surprising is that they did not just go outside for recess, but to harvest kale that the students themselves planted in the spring — and that will be served up in the cafeteria on Wednesday as kale chips.

Almost 80 first- and second-graders gathered in the vegetable garden outside of the school on State Street Monday afternoon to help harvest eight bulging bags of kale for the cafeteria. Second-grade teacher Darryl Clark has been leading the work in the garden for a few years, with the help of a few other teachers, but this week’s kale harvest marks an important moment.

“This is the first time in Belchertown where students have planted, harvested and then get to eat the food in the cafeteria,” Clark said. “Today’s child does not know where food comes from, so this is a huge step.”

Three first-grade classes joined Clark’s second-grade students on Monday, and every student got to harvest kale stalks and taste the kale raw.

But before these lush kale plants could flourish, lots of work had to be done in the garden to prepare for the vegetables. Parents of Swift River students wrote a grant early last spring to fund the installation of several raised beds in the garden and then came together over April vacation to install the beds.

“Belchertown is an agricultural community, so we really should take advantage of that,” Clark said. “Not all communities have the land and the agricultural history that we have.” 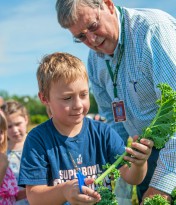 Later in the spring, Clark’s students, then first-graders, planted the kale with the help of some of teacher Louise Levy’s students from Belchertown High School. As part of Levy’s elective class, “Life on Earth,” students designed an interdisciplinary science, technology, engineering and mathematics, or STEM, lesson that would get them outside and up the hill to work with their elementary school neighbors. The lesson designed by students last spring was called “Let them eat kale” and taught the first-graders the basics of weeding and watering their crop.

“The real lesson here is for children to understand where their food comes from, and that they can be part of it,” Superintendent Karol Coffin said. She said the success of the garden was “truly a team effort.”

The vegetable garden also helps teachers teach to the updated science, technology and engineering standards in Massachusetts that require students follow the life cycle of a seed. Clark said that he uses large sunflowers growing near the kale to demonstrate this.

Perhaps most obviously, growing kale in the garden to be served in the cafeteria is also an opportunity to talk about healthy eating with students. Food Service Director Kelly Slattery worked with the teachers to make sure that the whole process was approved by the Board of Health, and to come up with a recipe that she thinks will be most exciting to the kids: kale chips.

“Kale chips would be, I think, the most well accepted by the kids,” Slattery said. “They’re crunchy and they’re fun.”

The kale harvested Monday will be used to make kale chips for 300 students, but the students harvesting the kale were pretty excited to try the kale raw as they worked.

Even though the jury is still out on the raw kale, the students all seemed to enjoy harvesting food that they grew for their own cafeteria. In addition to the kale, potatoes from the garden will be on the menu in October, and there are plans to continue expanding the produce that is grown there in the seasons to come.